This time last year there was one game on everyone’s lips – Pie Face. It was the Christmas sales smash of last year, with retailers struggling to keep up with demand.
But the story of its success started several months earlier, and it was all down to word of mouth.
In April 2015 a video of a grandfather and his grandson playing the game hit the web, it was soon being shared across social media, then mainstream media got hold of it. It’s hard give an exact number of views but there are various estimates of between 88-100 million. The game was actually launched by Rocket Games in 2014 but Hasbro heard about the buzz around the video, bought the rights and launched it in 20 countries in September 2015.
It’s sometimes hard to figure out what makes something a viral success but in this case it’s clear. The video is natural and very funny, so it’s easy and safe to share, with friends and your kids (and when they love it pester power kicks in) . The game itself is simple and something the whole family can play. And it was marketed at a very pocket friendly price.
And even if you weren’t on social media or hadn’t seen it in the mainstream press mums and dads were talking about it at the school gate. People were sharing where they had seen it on sale or offering to buy it for other parents. 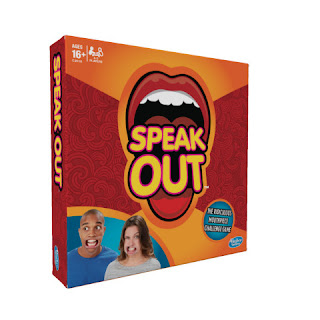 And this week it looks like Hasbro are about to repeat last year’s success with another hilarious (but adult-focused) board game. Speak Out was launched in June this year, after a collaboration with JoeSantagato, and we heard little about it until a video appeared on Facebook on 11th September. In 5 days it’s had 28 million views. Yes, 28 millon views.
Last night it hit my timeline and I immediately shared it, it’s funny and is similar to a game I play with my kids (taken from the game on TV programme Celebrity Juice) where you have to say words while keeping your teeth covered. Then I went to try and buy it. Amazon sold out. Argos sold out.  Every retailer sold out. And it’s changing hands for £50 on eBay (it retails at £19.99).
When I got to the school gate this morning the first thing a mum said to me was ‘have you seen that video of that new game, I wonder where you can buy it from’.
Hasbro seemed to have stumbled on an unexpected and low budget way to create cash in the till. When we’re talking to people about spreading the word we focus on letting things spread within people’s natural journeys, there’s real power in letting real people do the work for you.  And that’s especially important in a market where we’re overwhelmed with marketing and advertising messages.
There’s lots of talk about using micro influencers (we prefer to call them real people) to spread a message but you have to get the content right first – and this is what’s happening with Speak Out.  Maybe it’s time for brands to better understand with what we connect with, what we’re willing to share and why.